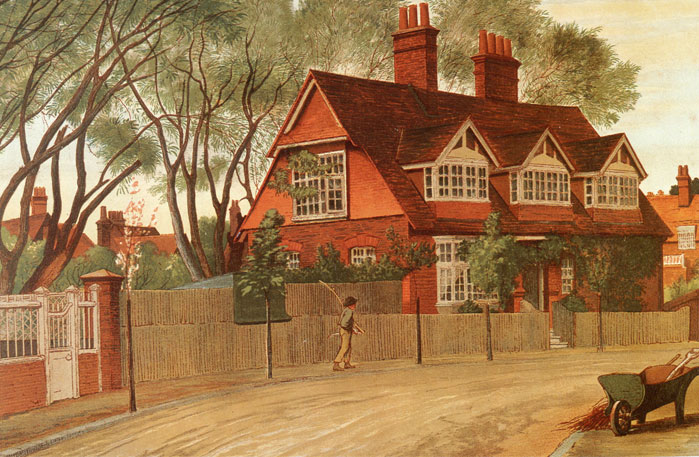 In the first of a series of extracts from The Victorian House Book, international interior designer the late Robin Guild, takes us through some of the influences of architectural style through the mid to late Victorian era.

All great art is subject to instant plagiarism and dilution, none more so than architecture. The original and lively minds in any generation provide the direction and, eventually, a kind of accepted grammar. The grammar of the 18th century, based on simple rules of proportion and scale, resulted in a coherent architecture guided by the taste of an educated few and limited by contemporary building technology. Mass-production and mass-communication of the 19th century changed all this. To the consumer, any underlying theories were unimportant: what was new was, by definition, the best.

Naturally, the majority of houses to which this study is addressed are those which descended at second or third hand from the original models thrashed out by leading architects of the day. To unravel the threads of each stylistic history a study must be made of individual parts, to which end later chapters of illustrated details will be useful.

Many Victorians were concerned that no essentially Victorian style was emerging, and it is true that their architecture up to the middle of the reign relied almost entirely on interpretations of classical or medieval forms. In the second half of the century, this was to change. Resulting in an architecture which was genuinely different, eclectic and one which was, by the end of the century, to flower briefly in stylized forms which were adapted on the Continent into Art Nouveau or, in Italy, il stile liberty (named after the London Department store).

The first major figure in this new phase was William Morris. He was one of the greatest of all Victorians: designer, artist, poet and socialist, he worked tirelessly to improve the standards of everyday design which, as a young man, he had so despised at the Great Exhibition of 1851. ‘Have nothing in your home which you do not know to be useful or believe to be beautiful,’ he proclaimed.

Morris continued the Pugin-Ruskin line of extolling the work of the artist-craftsman but more realistically in that he set up craft workshops to put his principles into practice, so establishing what became known as the Arts and Crafts Movement.

Morris and his collaborators searched for pre-industrial forms of furniture and tapestry which they developed with their own distinctive idiom. Many of their styles were 16th- and 17th-century in origin. Although the English Renaissance style had been popular for country houses of the 1840s, with Morris and Webb and later E.W. Godwin, it became the starting point for the radical simplification of form that took place in the 1870s.

Morris’s own house, The Red House, Bexleyheath, was built by his friend Philip Webb in 1856. It follows the designs of the rectories and vicarages that Webb had designed while working the office of G.E. Street. The Red House, like these vicarages, can best be described as architect-designed vernacular, employing classical and Gothic features to accentuate the facade and skyline. The detailing of The Red House was broadly utilitarian, providing the casing for the decorative art that Morris installed inside. Webb’s architecture is most often seen in conjunction with Morris & Co. interiors – he designed furniture for the firm as well as being the chief animal and bird draughtsman for their tapestries and fabrics.

In Philip Webb there is a link between Arts and Crafts and the Queen Anne style which grew in popularity in the late 1860s. Webb built a number of houses in Chelsea to complement the original Queen Anne housing by the Thames.

The leading figure of the Queen Anne revival was Richard Norman Shaw. An approachable and gifted architect, his large office produced designs for buildings from Chelsea to Hampstead as well as the utopian Garden Suburb of Bedford Park in West London. Shaw’s success and facility in turning out these fashionable houses led to criticisms that the architecture lacked thought. Morris himself was a critic of Shaw, but nevertheless, Morris & Co. accepted the commission to decorate the interior of Shaw’s Old Swan House on the embankment in Chelsea.

Extracted with kind permission from The Victorian House Book – a practical guide to home repair and decoration by Robin Guild is available from Sheldrake Press Price £30.00.