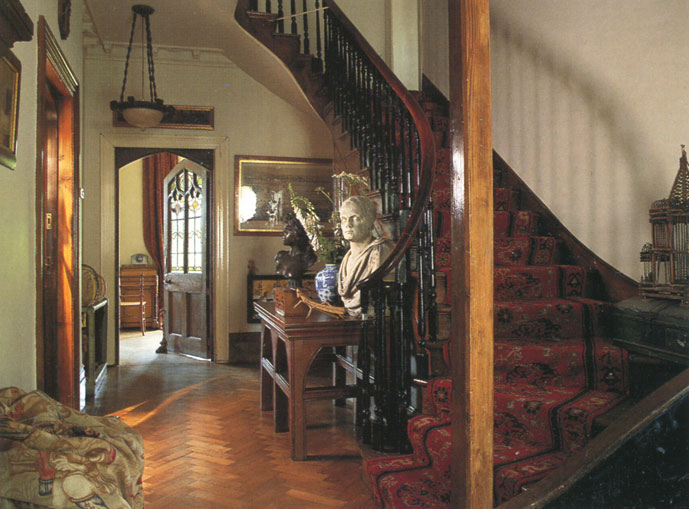 In the second extract from the Victorian House Book, interior designer Robin Guild takes us through the styling of Victorian Halls, Stairs and Landings.

Today, with our less visible pollutions, we forget that a hall once had to act as a cordon sanitaire between a comfortable indoors and a horse-driven, pea-soup fog world outside. A hall also had to impress the visitor and set the tone for entry into the public rooms. Despite the fact that many hallways in terraced houses were poorly lit, often only by a fanlight above the door, dark colours were widely used. They lent an air of authority to what were often thin party walls and, along with the encaustic tiles and marbleized papers, gave an impression of security to resident and visitor alike.

For the walls of the urban terraced hall, Victorians favoured hard-wearing materials. The most common mid-19th-century covering for the hall dado was a series of marbleized paper slabs which were stuck on to scored plasterwork in blocks. These paper oblongs could be replaced singly if any damage occurred.

Not all Victorians favoured this effect, however; Charles Eastlake’s Hints on Household Taste of 1865, which was a compilation of articles that had first appeared in the women’s journal The Queen, attacked this aping of palatial marble panels as an ugly and unnecessary delusion of grandeur in the hallway of an ordinary house. Eastlake favoured encaustic tiles, which were washable and hard-wearing, both for the floor and also as a wall covering to a height of three or four feet (about a metre). The most common dado covering in the second half of the century was leather-paper or anaglypta, an embossed and strengthened paper.

The fact that a hall is not a room where you spend much time gives you a little liberty to decorate with extravagant colour schemes, using a profusion of colours and patterns that is exciting when passing through but would become infuriating in a room in which you wanted to work or relax. Another difference is that the wall divisions in a hall are related to people standing, not sitting.

Given the narrowness of some halls, it is questionable whether any furniture is needed beyond hat-and-coat-rack and umbrella-stand. The hall table of the Victorians with a salver for visiting cards and a drawer for a clothes brush flanked by two chairs, or a bench with a wooden seat for waiting tradesmen, may not quite tally with a modern lifestyle. Nowadays a shelf over the radiator with a looking-glass above may serve for all purposes.

Relatively narrow halls were given fireplaces, and their minimal size needed all the support it could get from draught excluders to keep the staircase warm. A cold staircase inhibits movement and makes for a house divided against itself, creating a sense of claustrophobia. The area immediately inside the front door is sometimes divided off from hall and stairs by glass-panelled double doors. Like so much else in the Victorian house, this arrangement worked on three levels: the social, the aesthetic and the functional.

A lobby or vestibule was a regular feature in grand houses, and thus lent status and dignity to a humbler dwelling. The vestibule doors are often an attractive feature in their own right, with fine carving and elegant bevelled, frosted or stained glass, and the division improves the proportions of a long, narrow hallway which might otherwise seem like an endless corridor. This second set of doors also served as a draught excluder, often supplemented by a heavy curtain, and the lobby provided a useful space for coat-hooks and umbrella-stands.

The living-hall revived by the Arts and Crafts Movement was a rather different kind of entrance. In essence a modest great hall, harking back to medieval origins, it was strictly more of a living-room than a hall. William Morris hated the precious clutter of the mid-century drawing-room; in a living-hall simplicity was the theme. The focus of the room was the inglenook with its welcoming, wide hearth, and broad low seats. The decoration was plain, dominated by woodwork and heavily reliant on local brick or stone which served, undressed, for the hearth and inglenook. By the end of the century, the living-hall was frequently invaded by the clutter from which it had originally provided an escape. Voysey complained that many a hall was full of ‘vulgar glitter and display’, a ‘vast expanse of advertisement’ that reminded him of a railway station.

A hybrid living-hall and great hall became part of the basic vocabulary of villas and smaller country houses from the 1880s onwards, lined with dark woods, filled with museum-like displays of trophies and decorated in a vaguely ‘Jacobethan’ manner, a revivalist mix of Elizabethan and Jacobean styles. The ceiling would be relatively low and might be elaborately plastered with strapwork detailing or left as open oak beams. A porch with a staircase leading off it fulfilled the strictly utilitarian functions of insulating the front-door area, with all its comings and goings, from the rest of the house.

Stairs were generally of wood in the south-east of England, and were often elaborately decorated, even in quite ordinary houses, with a mahogany handrail, turned balusters and prominent newel posts. Of the many different baluster designs, ‘spindle’ was the commonest, largely because it was easy to mass-produce on a lathe. Stone staircases were common north of Leeds and west of Ludlow. They are most often found in the kind of large Victorian house now converted into flats. Metal staircases as a rule occur only in the grandest Victorian houses and were normally reserved for external use, or for servants.

The simplest way to deal with the stairs and landings of the terraced house is to run the same colours and carpet from top to bottom. This will supply a basic unity within which to arrange decorative features, built-in cupboards, pictures and furniture. Old fashioned stair-runners with brass rods remain the most attractive way to treat wooden or stone staircases. However, narrow and more cheaply-made stairs may look better with fitted carpet: the narrowness will make the rods seem awkward, and the wood may not be strong enough to hold the fasteners for the rods. Except when graining or marbling is used, skirting and the edges of the stairs are best painted the same colour; this will add to the sense of height, as well as saving laborious brushwork where two colours meet.

On the top landing, where the balusters meet the floor above the last flight of stairs, it is often difficult to finish the carpet neatly, especially when the balustrade is of cast iron. The best method is to abut the carpet against a strip of flat moulding cut to the width of the handrail and laid in front of the balusters.

If you need to build an additional flight of stairs, say to a newly converted loft, it is worth searching for balusters that match those in the original staircase. Alternatively, remove every other baluster in one of the lower flights, fill the gaps with square planed timber balusters and continue the design in the new flight of stairs, alternating plain and turned balusters in the same way. When you are building an entirely new staircase, the designs shown opposite may prove helpful in planning an attractive scheme.

Another feature that benefits from close attention to detail is the doormat inside the front door. The bigger the mat, the better it will look. The best treatment is to sink it in a mat-well. Suitable matting can be bought in rubber-backed rolls and cut to fit. In a wooden floor the mat-well should be lined with wood, and in a tiled floor with tile. In carpeted floors, carpet can be turned over the edge of the well to form a lining. Where a hall is divided by vestibule doors, the entire lobby may be carpeted with matting.

Long, thin landings and halls pose special challenges. For many years, designers have been tackling the apparent endlessness of corridors in the larger hotels by incorporating arches, columns and alcoves. Some of these ideas can be applied in a domestic setting. Alternatively, if a long corridor leads to just one bedroom, it can be shortened and the space incorporated into the room, forming an inner entrance hall.

Extracted with kind permission from The Victorian House Book – a practical guide to home repair and decoration by Robin Guild is available from Sheldrake Press Price £30.00.

Cinema Seats From Another Era